Sunsets are just fine by me and occur at a much more reasonable time. Thus, my idea of an early start is 7:00 am. If there is good reason to get up before then I have yet to find it. Then again I don’t make my living on the water. If the water is your office, be it rivers, lakes, or seas, it behooves you to get an early start and reap the benefits of calm winds, cooler temps, and a subdued sun. When I approached Keith Bruno to ask him if I could tag along with his boys to shoot images of them working the waters around Oriental he graciously agreed so long as I kept the focus on the work and avoided the politics between commercial fishermen and sport fishermen, regulatory agencies and similarly charged subjects. I confirmed this would not be a problem and explained my interests were experiential, not political. I wanted to be part of, if for only one day, a family business born on the water that engages and enamors casual observers to this day. I want to see how life in the river becomes food on our table. But mostly I wanted to experience these two brothers that I have heard so much about, in their element doing what they do and have done their entire lives. So long as his 19 year old and eldest son Zachary approved, Keith was good with my plan. I was to check back in at 8:00 pm to make certain I could be accommodated on board. I followed up that evening according to schedule and the trip was confirmed, roll out from Endurance Seafood at 5:30 am.

I’m lucky to live in Oriental for many reasons. This morning I was uber thankful for the short commute over the ONC bridge and the confluence of Smith, Green, and Kershaw Creeks to the front door of Endurance Seafood. Of course Endurance doesn’t really have a front door at all. It is more like an open air market accessible via the Bruno’s driveway for those inbound by land and a private dock for those inbound by water. There is nothing fancy about Endurance. When I think of words to describe it adjectives such as raw, authentic, genuine, and unfiltered come to mind.

The lights were on and the brothers were already working, doing what I don’t know, but I could tell this was part of their daily routine. I was thankful to see they were at least as bleary eyed as me and I wasn’t alone in my state of mixed lucidity. I have shot images of the boys before and bumped into them on the water but I am a believer in formal introductions so I did the honors and our acknowledgement of each other was now official. Small talk was brief, yes sirs were abundant and I reiterated to the brothers I was here to capture them in their element but at any time should I be in their way to tell me to clear out and they could consider it done

So I stayed clear while the nets were packed, bait was brought on board, gear was sorted and Kahlua the Cat chowed down on breakfast. When it was time to shove off Zach gave me that look that I can only assume is understood by a waterman but fell on this land lubbers ignorant eyes. Now forced to verbally confirm our departure…

Zach: Ready when you are sir!

Me: Where should I sit?

Zach: (Looking around at the limited options) Wherever you can fit…

Me: And my camera bag, where is the best place?

Zach: (Looking around at the same limited options) Well… the front half tends to stay the driest.

My breakfast was brief because my digestive system hardly knows what to expect being aroused at such an early hour. I imagine it is preparing for the worst, going to battle, having to defend home and person, or some other serious situation. Why else would we be up right now? I envied Kahlua’s relative feast and the smugness she exuded by leaving the top half for the gulls (whom I might add were not up yet either…). The breakfast of my crabbing champions should not have surprised me because it has served as the breakfast of this champion on many occasions. Despite evidence they lack sufficient nutritional value, Maple and Brown Sugar and Smores Pop Tarts, should not be underestimated as a legit fuel source.

Nor should the prevalence and importance of streaming media be underestimated. The first question 16 year old Ben asked me which also happened to be our first verbal exchange was my preference in music. I asked him what their go to choice was to which he responded, Country and Comedy. I told him either would be fine so he popped out his iPhone, showed me a dozen or so killer sunsets and sunrises he had captured, and proceeded to queue up the tunes, Country it was. After several hours of non-stop and non-repeating melodies I had to ask how much music he kept stored on his phone. One quizzical look later and he informed me we had been streaming Pandora this whole time. Here we are, crabbing the shoreline along the Neuse River and streaming country music on Pandora. God bless America.

Crabbing is a methodical process and the Bruno brothers have their process dialed. Throughout the day they educated me on the rules and regulations they have to abide by and pointed out a wildlife officer tagging pots to ensure the owner of said pots was not leaving them unattended for more than 4 days at a time. Just like any athlete or artist who has perfected their craft, thus making it look easy, these boys have done the same when it comes to placing, hauling and replacing their lines of pots. The process goes like this. Place the pots where you think there are crabs. This is largely based on experience and trial and error. Let them soak for a couple of days. Come back to the line, pull the pot in the boat, shake out the crabs, bait the now empty pot, and toss it back in the water all before the next one is reached. The timing of picking, pulling, dumping, baiting, and depositing was like a dance. If Ben was too slow, Zach let him know he needed to pick up the pace, if Zach was too fast, Ben would let him know to slow down. I could see how this balance could be precarious but the brothers never lost their cool and rarely seemed adeld. It was fun to watch them get into their rhythm, repeating the process without missing a beat, or a crab.

The Wilder Side of The Neuse

It would be a great disservice to talk about the art of crabbing and fail to mention the setting. Ben Casey has written about the diversity of the Neuse in his book, “All In One River”. It is easy to appreciate that diversity even in the relatively short reach we worked that day. From sand bottoms and beachy spits to 30+ foot bluffs, to stumpy mud flats, to tall marsh grasses thicker than fresh cream. All this is encountered before ever reaching New Bern and the more riverine stretches lined by cypress swamps. For many years my taste for natural beauty was satiated from the roads by the big skies and vast expanses of idyllic terrain. Once I began to see the area from the water I realized just how small the tip of my iceberg really was.

Let me clarify should there be any doubters that crabs are vicious little buggers. If you are one of those types that feels bad for the crabs being caught, go out and catch a few sometime, watch them turn on each other as quick as they turn on you. I guarantee your sympathies will be abated. I learned this on my first foray into dealing with crabs while shrimping with another interesting local, Justin Lee. Justin failed to inform me that these hostile little creatures will clamp down on your fingers with no remorse and no intentions of letting go. Lucky for me I was wearing gloves when I learned this the hard way. On this trip I knew of the crabs ferocity and penchant for pinching. What I failed to remember was their reach and speed both of which are significant. After a brief education in the difference between soft crab and hard crab and how soft crabs can’t pinch I carelessly pointed towards what I thought was a soft crab on the sorting table, an effort to demonstrate my new found knowledge and prowess of observation. I was quickly greeted by my suspect with a vicious pinch on the left index finger. A shriek, a few obscenities and a quick shake and the brute released his grasp. I was certain the ensuing laughter would send at least one of the brothers overboard.

Ben pulled in the last pot from the last line as the sun reached it’s peak in the summer sky. I knew I was burnt but I didn’t care. Even though I had only documented their work I still relished in the satisfaction of having spent the day working with them on the water, connected to the natural environment, being reminded how quickly it will turn on me, and on you, and the immense amount of satisfaction looking at the haul, even if it was only “acceptable” according to Zach. I hear many lament the hard work of trying to make a living as a commercial fishermen and make no mistake, it is hard work but having recently left the corporate world of business casual, expense reports, conference calls, and TSA frisking, I don’t feel anything but joy for what these two brothers go through. Getting stuck for hours in an airport on a layover never reminded me of what it’s like to be alive, being caught in a ferocious rainstorm, high tailing it for shelter will always remind me of what it feels like to be alive, and how quickly it can all be over. Working alongside your family, vested to the core in the success of the business is an experience that can’t be recreated on an org chart. Despite the labor, the uncertainty of the haul, and the stresses of working outside, this is L-I-V-I-N… living. The richness of this life cannot be calculated on a balance sheet. It can only be told by lines on faces, scars on hands, and the bond shared between families. It was an honor to be part of that if for only one day, a reminder of what truly matters. 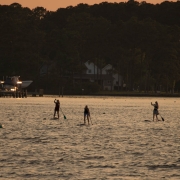